Sample Music Minus one video

I've just published another FREE sample from my Music Minus One service: Robert White's beautiful 5-part in nomine. You can play along on tenor or bass viol at A415Hz. The part can be downloaded from the video description on YouTube or here:

Fretwork's soon-to-be-released album ‘Lamento’ with Iestyn Davies has just been given a glowing (if not entirely factually accurate - Silas Wollston was not directing!) review by The Guardian. Excitingly, they also published one of the videos I made during rehearsals.

‘If the subject matter is dark, the joy comes from the beauty of Fretwork and Davies’s interpretations, directed from organ and virginals by Silas Wollston (with a contribution, in the Schütz, from countertenor Hugh Cutting). Davies is not only capable of singing about pain and anguish – for contrast, try If (Signum Classics), his other disc with Fretwork – but the purity of his voice, with its rich palette of inflections, and his communication of the text, makes this ideal repertoire for him, and us.’

You can listen to some singles from the album right now on Spotify, Apple Music, and other streaming services.

Read the full piece and watch the video HERE.
January 2021

I've just created a new website for my recording service, 'Stadlen Productions'. The new site showcases some of my recent work and provides contact details. If you're interested in recording a project with me, please get in touch! The new site can be found here. 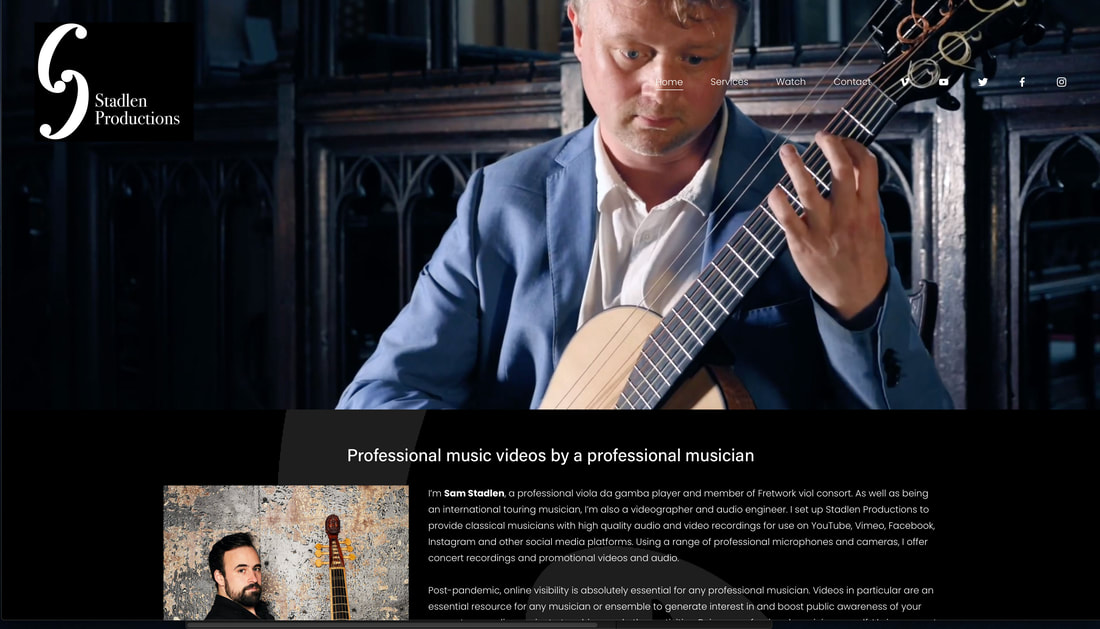 In Memoriam Michael Jarvis - my friend

On Christmas day, with the sudden death of Michael Jarvis, LSJ trio and I lost a dear friend and irreplaceable colleague. Michael was a kind, hilarious, outrageous and intensely musical guy whose uncanny ability to unearth unknown but incredible music led us to record and perform some truly wonderful programmes.

Having met briefly at a post-concert party during a Fretwork tour in Victoria, Michael took a leap of faith and invited me to come and record with him and Paul. Although we'd never worked together before we all quickly became great friends and have since enjoyed almost 4 years of music making. Michael always seemed to have full faith in me and pushed me to perform and record music I didn't think was within my technical abilities.

We always had immense fun playing together. Michael had both a highly-informed approach to music and an instinctive feel for it which made playing with him both fun and inspiring. Our rehearsals were democratic and creative and we spent as much time laughing as we did playing. Our concerts were the same - we made a point of laughing, smiling (nay, grinning) and interacting on stage in order to try to communicate to the audience our love of the music and of playing with each other. The performance at the end of this video exemplifies this.

We had so many projects left to explore and perform. In fact, Michael kept saying 'we have to get on with it guys - I've only got 20 productive years left'. While we won't be able to do those projects together, we do at least have a number of recordings yet to be released.

The attached video includes part of the last performance we ever did as a trio - originally recorded as part of a concert for Early Music Voices, Calgary. We had great fun recording it, though the process was tinged with sadness because our tour to Calgary had just been cancelled due to the pandemic. Needless to say, it was followed by a good beer-drinking session: sours for me and Paul, Duchess de Bourgogne for Michael!

Michael's going to leave a terrible void in our lives, but also a huge number of wonderful memories. My thoughts go out to his wife, Carolyn, his friends in Victoria, and to the musical community of British Columbia.
​
I learned so much from him and I think I'll always have his voice in my head egging me on to play the music I think I can't play.
April 2020

I'm very excited to announce that my Patreon site is now live! The idea behind this Patreon account is to provide a service to all viol players who wish to keep playing, learning, and enjoying the viol, even in difficult, isolated times such as these. Here, you will find tutorials, videos and audio files to play along with, and scores and parts. In other words: everything you need to keep playing consort and baroque music even when there's no one around to play with.  Subscribers get access to my growing archive of 'music-minus-one' videos and audio files. These are recordings of consort music with one part missing, allowing you to play 'in' a consort without being doubled, even while you're at home, alone! So, in Robert Parson's In nomine a 4, there are 4 videos, each one missing a different part. Watch the sample video, above, to get an idea of what's available.

All the pieces are available at A415Hz and A440Hz, so you can choose your tuning.

Your subscription entitles you to commission either one tutorial video on a subject of your choice or one viol-based 'music-minus-1' video per month. You can do this by sending me a message through Patreon or via email.

The files can be accessed through a DropBox folder that's only available to my Patreons and the videos are also available on YouTube. A link to these will be sent to you when you sign up.

The Tutorial videos will be publicly available so that everyone can benefit from them. However, as a subscriber, you can dictate their content and commissioners will be credited on the title screen of their video (if you wish).
If you're interested, click here:

https://www.patreon.com/samstadlen?fan_landing=true
I'm looking forward to welcoming you as a subscriber! 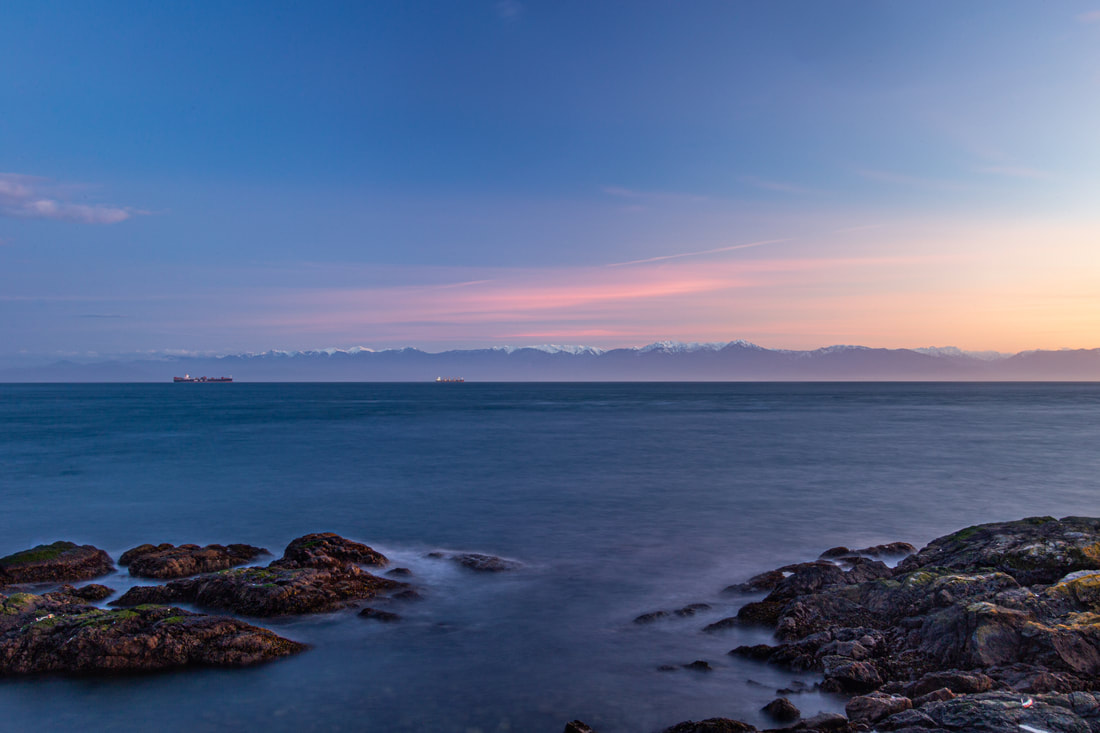 Well, I'm back in Canada! Well, actually, I'm home again now. I managed 3 of the planned 4 weeks before everything was cancelled due to the COVID-19 pandemic. We got a lot done though and have finished recording our next CD - music from the Bach-Abel concert series, most of it never-before recorded! We lost two big concerts in Calgary and Lacomb in the final week but, thanks to the wonderful, creative, experimental people at Early Music Voices, Calgary, we arranged to video our concert and share it with ticket-holders via Youtube. Stay tuned to the LSJ Trio YouTube Channel for clips to come in the next few weeks!
October 2019 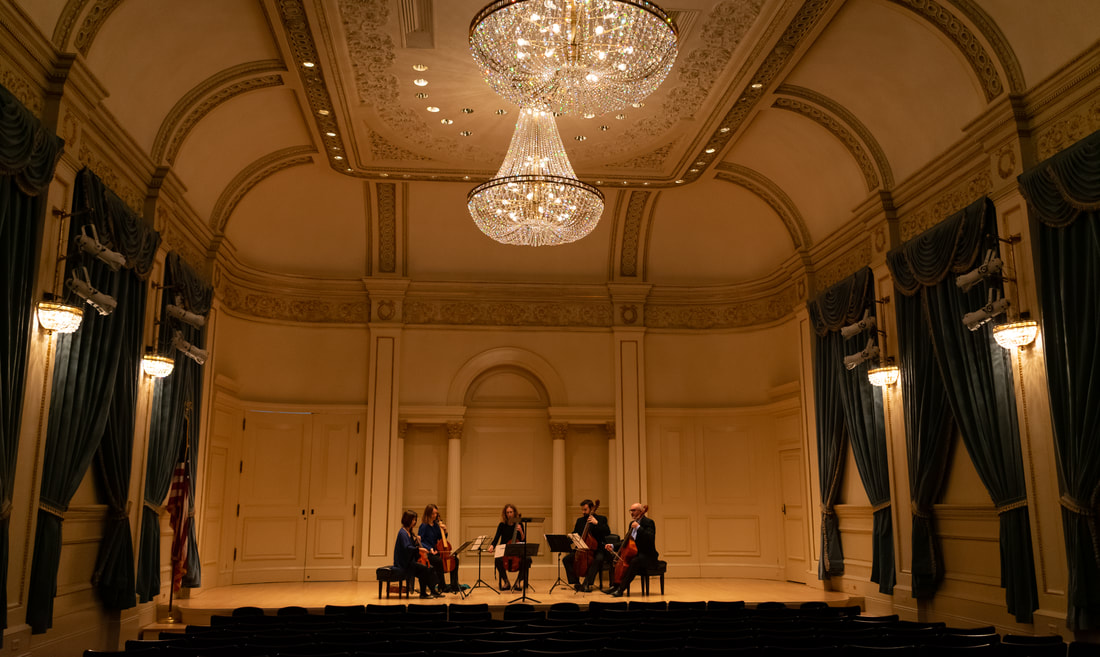 Last night Fretwork had the honour of performing at Carnegie Hall with Iestyn Davies. It was sold out (above photo was taken before the audience came in) with a great, enthusiastic audience and was a fantastic, thrilling experience. Acoustically, the Weill Auditorium is a great place to play viols and feels similar to the Wigmore. The concert went really well - what a night! Thanks to Laura Herrera for the photo! Fretwork's Grand Tour of the Americas continues with Boston, Cleveland, Chicago, Tucson, Kansas City, Vancouver, Victoria, and San Francisco! 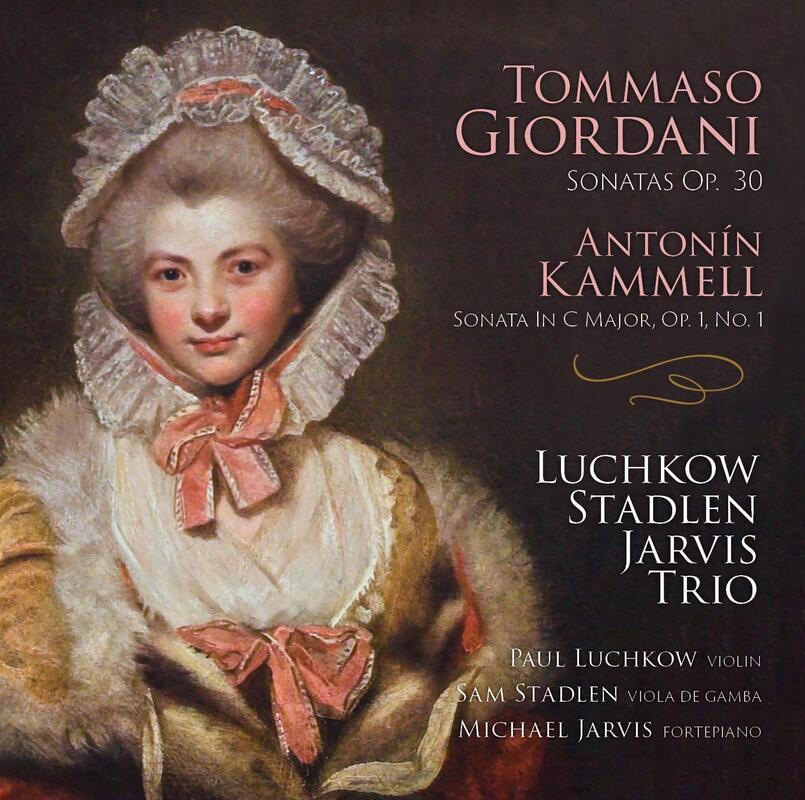 LSJ Trio's debut CD - the world premiere recording of Tommaso Giordani's Op. 30 sonatas for violin, gamba, and piano - is OUT NOW! You can grab a copy on Amazon, Spotify, from us direct (drop us an email), or from the Marquis Classics website:

Actually, THESE just in! I've just received the pre-release copies of LSJ Trio's debut CD: the world premiere recording of Tommaso Giordani's Op. 30 Sonatas for violin, gamba, and piano. The CD is looking and sounding rather lovely (if we do say so ourselves) with its pink accents and a beautiful Reynolds portrait of Viscountess Althorp gracing the cover.

These sonatas are really wonderful and should be better known. Look out for the worldwide release on October 11th 2019 and will be available in all online and retail sellers. 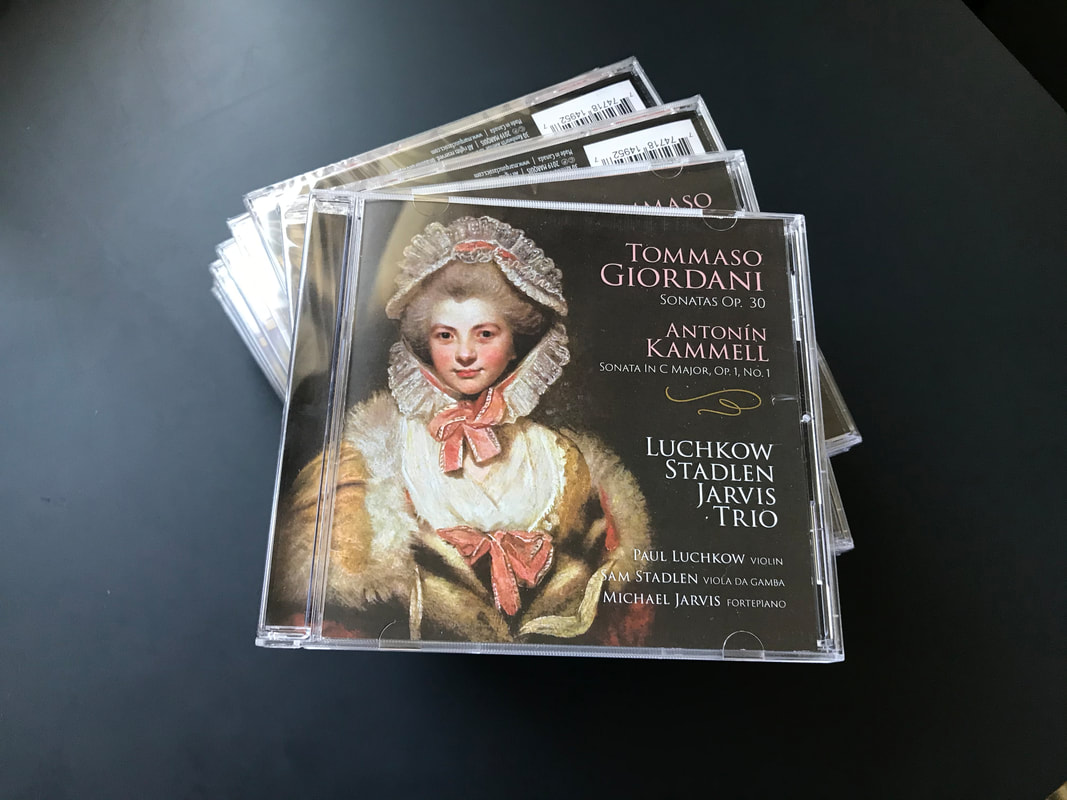 This week I had the pleasure of recording the fantastic vocal group, Songspiel in Britten's Library in the Red House, Aldeburgh. They were recording a newly composed song cycle by William Marsey and we spent a lot of time experimenting with visualising the lyrics through video. I thoroughly recommend seeing them live in concert - wonderful musicians, all. Watch this space for the video releases! 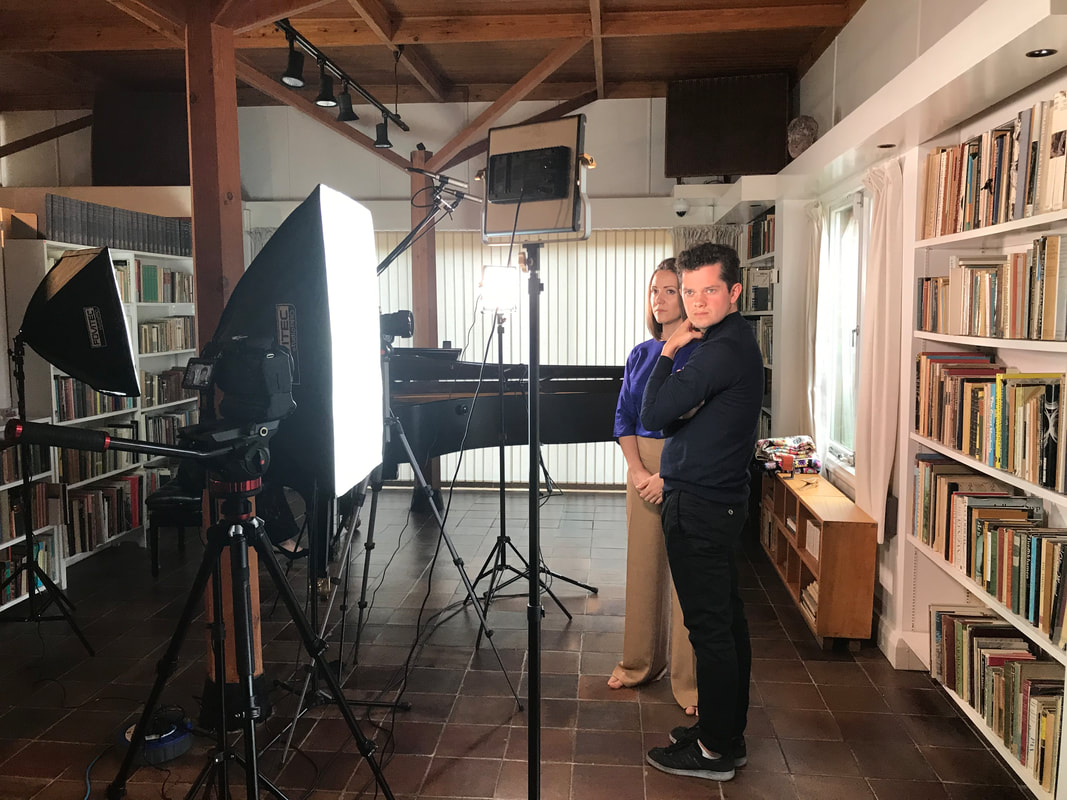 I'm now part of an exciting project to revive the little-known trumpet marine! Along with Clare Salaman, director of the Society of Strange and Ancient Instruments, Reiko Ichise, and Jean Kelly, we're planning a series of concerts around the country culminating in a recording of music both old and new in an ensemble of four of these magnificent instruments.
​
More soon! 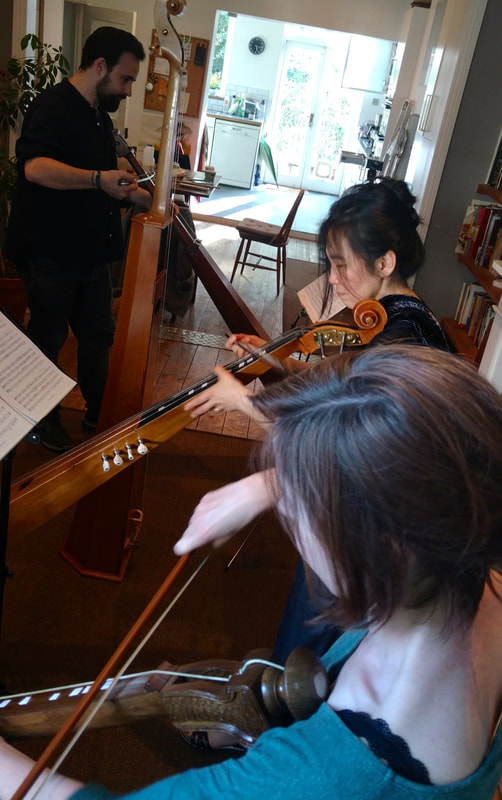 I've had a wonderful time giving masterclasses at the Royal Welsh College of Music over the last few days. All of the viol students were excellent and made the whole process really enjoyable. 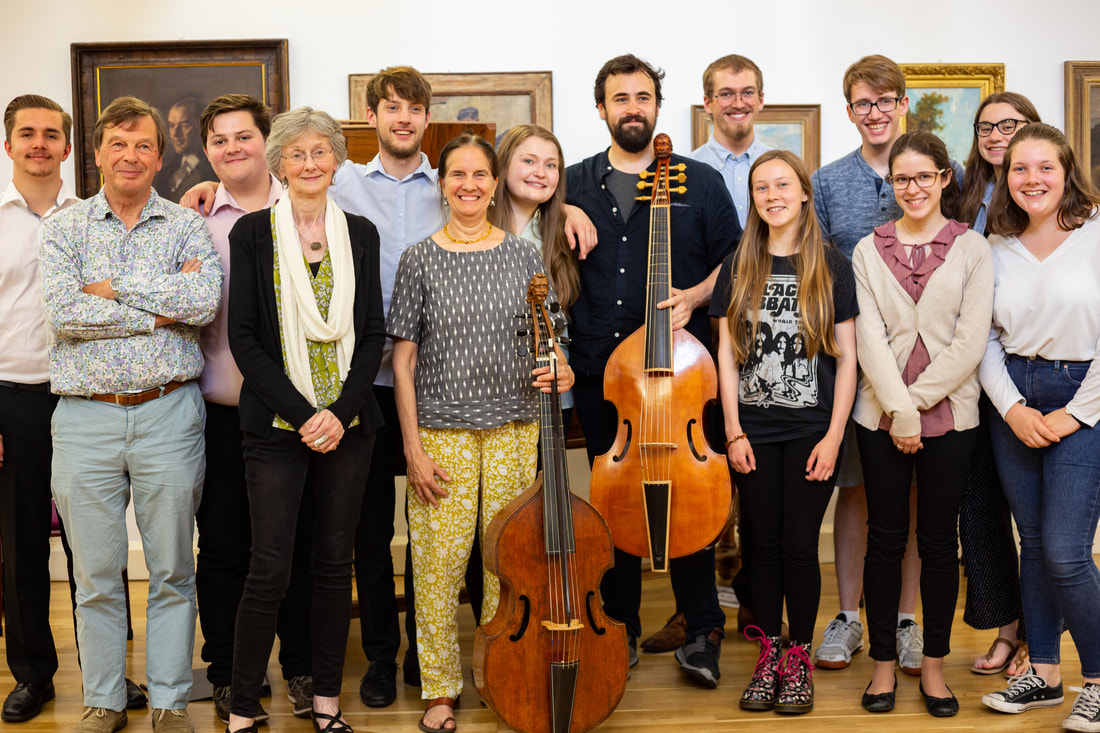 
2015:
November/December: Presented 'Introduction to Studying Baroque Music' lecture series to 1st year students at the University of York.
- Ongoing: Developing a concert of new and old music for two viols based upon 'The Tempest' with Charlie Barber and Ibi Aziz. Featuring new compositions and arrangements of 17th Century music for two viols by Charlie Barber. More information can be found on The Tempest website.

-April 30th: Leading a day of lectures and practical sessions at the Royal Academy of Music.

- University of York consort of Viols: Currently performing with and helping to tutor the University's student viol consort with Susanna Pell (http://www.susannapell.co.uk)
Concerts have included:
3rd, 4th, 5th February, 2014 - a series of workshops with Bill Hunt on the performance of English verse anthems by Byrd, Gibbons, and Tomkins.
6th December, 2012 - A joint concert by candlelight with Pellingmans' Sarabande at the NCEM. Featuring vibrant, virtuosic variations and grounds for viol and lute alternating with dances by Anthony Holborne including The Cradle, The New-yeeres gift, Heigh ho holiday, and As it fell on a holie Eve.

- December 3rd: Performance/workshop of student compositions at the Royal College of Music, London with Fretwork.

- Dowland lute song project with trio Lachrymae, featuring soprano Louisa Dobson and lutenist Elena Cicinskaite (www.elenacicinskaite.com). An exploration of lute songs by Dowland, Campion, and others with both viol and lute accompaniment. Concerts to follow shortly.

- May 8th: A day of lectures and workshops on the influence of French Baroque poetry and declamation on music of the period at the Royal Academy of Music.

- Lecturing at the University of York. I have just finished teaching a first year undergraduate lecture series or 'project' entitled 'Introduction to Studying Baroque Music'. This was a month-long project that introduced students to a wide range of topics relevant to the Baroque including historically informed performance practice, baroque dance (with the expert tuition of Frances Norbury), editing, research skills, and musicology.

20/08/13: Gave lecture on the poetic structures of the pièces de viole and the impact of linguistic considerations on their performance. Marnaves Summer Baroque Course with Lucy Robinson, Andrew Wilson-Dickson and Margaret Faultless.

16/03/13: Gave paper on Hubert Le Blanc and the poetry of French Baroque pièces de viole at the Viola da Gamba Society conference at the Music Department of the University of Oxford.

2011/12: Lectures given to undergraduates and postgraduates at the University of York on the influence of language and literature on vocal and instrumental performance practice in seventeenth- and eighteenth-century France. Performance on the viol included.